For the album, see The Great Milenko (album) 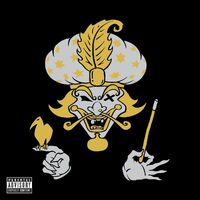 The Great Milenko is the face of the fourth Joker's Card of the first deck.

From deep within the Netherworld of shadow walkers comes yet another exhibit of the Dark Carnival. He is the master of the art of using magic without magic. He is a Necromaster... the craft of using magic through the dead. Dead meaning both physically and mentally. This spectacle shall be witnessed only by those who are meant to see it. Look deep inside of your soul and ask yourself... Do you hold a ticket to witness the show? The answer lies within yourself. He is the fourth to rise. He feeds upon one's own greed. He is powered by one's own jealousy, lust, and temptation. To envision yourself with something that rightfully does not belong to you... that is the illusion cast by him. To act upon this vision and seek it out at the expense of another... that is the magic cast by him. Continuous dreamers of profit at the cost of another are pledged and haunted by his wizardry. Others are content and satisfied with what they can achieve by themselves and have not the urge to tamper with another's well being for quick gain. They see him only as a hoax and see no illusions or magic by he. It is simple... He is you. His illusions are your evil thoughts. Your evil acts are his magic - yesterday, now and forever. You and he are the fourth to rise... You and he are the master of Necromancy... You the dead and him the magic. Together, you and he are The Great Milenko.

Community content is available under CC-BY-SA unless otherwise noted.
Advertisement